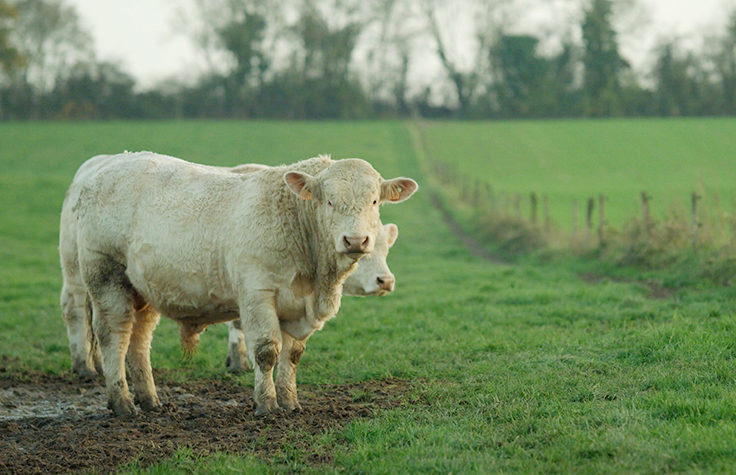 Evolution, an agriculture cooperative, has been offering bull genetics and animal insemination services since 2013 to its members and producers in France. The collective has more than 700 insemination technicians who work on farms from Brittany to Auvergne, carrying out nearly three million total animal inseminations (TAIs) and helping to keep area cattle herds hearty and healthy. Sébastian Clairand is Manager of the Meat Sector for the Evolution Cooperative. He is also the Director of Charolais Univers, a genetic cooperative that focuses specifically on the Charolais breed, a type of taurine cattle from eastern France raised for meat.

Evolution and Charolais Univers have been supporting farmers in their quest to meet nutritional and environmental challenges long before genetic technologies were in play. However, selective breeding using genotyping data is now offering a revolution in the techniques used to assess which cows are best for breeding to support Charolais, as well as the Limousin, Blonde d’Aquitaine, Aubrac, Salers, and Partenaise breeds. “When we first launched our genetics program, it was a breath of fresh air,” Clairand said. “It enabled us to rethink our selection processes, buy fewer males for the program, and increase our return on investment.”

Clairand is pleased with Evolution’s ability to assist farmers and technical teams that work with the Charolais breed. “We focus on profitability and also the technical aspects of genetics,” Clairand added. “It’s important for us to perform work that will be sustainable in the field. It’s a virtuous circle that enables us, and our farmers, to make progress in meeting our common goals.”

iCommunity spoke with Clairand about the ways that genetic selection can improve the suckler beef selection process, while supporting sustainable environmental practices.

Sébastian Clairand is Manager of the Meat Sector for the Evolution Cooperative and Director of Charolais Univers.

Sébastian Clairand (SC): The Charolais breed has a population of about 1.6 million animals in France and is present in 70 countries throughout the world. It has international notoriety because it is the largest suckler beef herd in Europe. The genetic work that has been performed with this breed has enabled us to build a reference genome and make a leap in using genotyping tools in our day-to-day selection processes.

Q: What approaches did you use to inform Charolais breeding decisions a decade ago?

SC: Before the arrival of genotyping, we relied on progeny testing in specific testing stations. At the start of the 2000s, we began assessments at farms using the IBOVAL Index (a method for evaluating the genetics of beef breeds).

Almost all the characteristics we need are available in the IBOVAL Index. We were particularly interested in the weaning indexes. As part of those indexes, we can find essential characteristics like ease of giving birth, growth, and morphology characteristics, such as muscle and skeletal development. Growth is extremely important in suckler beef herds because a farmer’s revenue is directly linked to growth. For the maternal traits, there are indexes for the ease of calving, milk quality, and production. This information is extremely important when selecting females for the future herd and renewal of the farm.

Q: When did you add genotyping to your services?

SC: At Charolais Univers and Evolution, we began using genotyping when the tools became available. We began offering farmers with a genotyping service, starting with the Charolais breed. We genotyped quite a few males and females to guide our selection plans and understand the genetic value of these animals. We were able to identify the best males earlier in our selection program, and the best females to become embryo donors. The information enabled farmers to identify males and females with the most useful genes for a small herd or for wider use.

"Carrying out genotyping on animals when they are a few days or weeks old...gives us information about the animals’ meat potential from the very beginning of their lives."

Q: How quickly did you see uptake of the genotyping services that Charolais Univers offers?

SC: I was very surprised to see the level of buy-in from farmers for what was a new technique. Farmers are not always early adopters. They prefer to wait until a technique has been validated before using it on a large scale. However, this technique found a place very quickly with farmers, for male and female selection. The tool for working on ascendancy quickly persuaded teams in the field to use this tool to help with the selection process.

Q: How has genotyping changed the selection process?

SC: Carrying out genotyping on animals when they are a few days or weeks old enables us to have indexes for the animals at the time of weaning. This gives us information about the animals’ meat potential from the very beginning of their lives. We can also assess bulls for their ability to pass on growth potential to offspring, as well as assess cows for their maternal qualities and ease of giving birth. The information enables us to make better breeding decisions.

Q: Which other genotyping benefits resonated with farmers?

SC: Genotyping provides us with information beyond the indexes. It enables us to know the status of the animal with regards to the culard gene (associated with muscling), the gene for horns (sometimes called a polled animal), and genetic anomalies that are common in the Charolais breed, such as ataxia and blindness.

The ability of genotyping to help manage genetic anomalies, such as ataxia, was a benefit that highlighted the technique’s usefulness. About 30% of Charolais animals are heterozygote or healthy carriers of the gene that can lead to ataxia. Genotyping enables us to identify carrier animals to optimize mating choices and manage the disease. In the future, it will help us eradicate this genetic anomaly from the breed.

Genotyping also enables us to fine-tune our choices on which animals to keep. If the farmer wants to have a herd that calves easily, then a farmer will prefer to work within the ease of calving index. If a farmer wants to work with more maternal or dairy traits, then the growth and morphology indexes will enable him to make the right selections to support the direction they want to take the herd. It’s creating a system for farmers that is binary. If an animal has the right version of a gene present, the farmer can decide whether to keep it or not depending on the strategy of the farm.

Q: When are parentage tests performed on animals?

SC: Compared with dairy breeds, we don’t necessarily need an extremely early parentage diagnosis for suckler beef herds. The production system for brood cows, where the calf is with the mother for 7–8 months, enables us to carry out the first genotyping samples at around 3–5 months of age and get the results before the calves are weaned. It’s early enough to act as a guide and decision-making tool for the farmer, enabling them to choose the animals for reproduction and which are destined for meat.

"It’s early enough to act as a guide and decision-making tool for the farmer, enabling them to choose the animals for reproduction and which are destined for meat."

Q: What percentage of the Charolais breed have been genotyped?

SC: Charolais Univers is one of several development companies for the Charolais breed. We launched our genotyping program two years ago and have carried out over 4000 genotypes in male and female animals.

Q: What will it take to persuade more farmers to use this tool?

SC: The ability to understand and manage genetic diseases better is a compelling benefit of genotyping for farmers. It's also persuasive for farmers to see the genetic progress at farms that are using genotyping to select the best females at a very young age to renew their herds. It’s an example of how genotyping can assist a farmer in making genetic progress more quickly than by using the tools that are currently available, such as indexing.

Q: What are some of the advantages for consumers of the use of genetics in cattle breeding?

SC: Genotyping mainly benefits farmers and selection companies. However, Charolais Univers and Evolution have started working with industry to use genotyping to make selections based on meat quality. This will have a direct application in the meat industry and for consumers because it focuses on guaranteeing high-quality meat that is tender, marbled, and has good color. Identifying the bloodlines that are useful in developing these criteria is important. We are still in the development stage, but we hope to be able to bring this capability, and the message about the importance of genomics, to consumers within a few years.

Q: What are some of the challenges facing the meat production industry in the next few years?

SC: I see three important challenges for the meat industry, from the producer to the distributer to the consumer. The first challenge is ensuring the well-being of the animal, which is important for all players. That includes their ability to overcome birth and weaning stress, and their ability to resist disease. The second challenge is to work through our research and development projects to find ways to guarantee the quality of the meat for consumers, ensuring that it is tender and marbled. The final challenge is how to meet the increasing demand for meat due to the increasing worldwide population. To produce high-quality meat at those levels, we need to increase the numerical production of a brood cow herd, as measured by the number of animals produced per herd. That requires an increase in female productivity, through the growth potential passed down through their genetics, to produce more meat while also being kind to the environment. We want herds with the lowest carbon footprint as possible.

Q: What is the future of genetics in cattle breeding?

SC: Our goal is to make these tools accessible for everyone so that we can constructively move forward. We also want herds with the lowest carbon footprint as possible. Genotyping will help us detect new characteristics and identify new bloodlines that are useful for Charolais performance criteria, while still reducing the impact of our herds on the planet. By selecting the most successful bloodlines that meet the expectations of farmers and consumers, we can have animals that transform cellulose better and make better use of roughage in feed. The result will be animals that give off fewer greenhouse gases and minimize their impact on the environment. We also hope to select for animals with a higher tolerance for certain parasites, enabling us to reduce the use of medication.

Our genomic program is only two years old. Yet, it has offered farmers with the opportunity to boost their selection programs, with a much earlier indexation of animals, and increase the genetic progress on their farms. We plan to continue our work and develop new opportunities and characteristics to enable our farmers-members to manage their herds.