EuroGenomics shares genomic information gleaned from use of the Infinium BovineSNP50 BeadChip and a custom BovineLD BeadChip developed by seven EU partners. 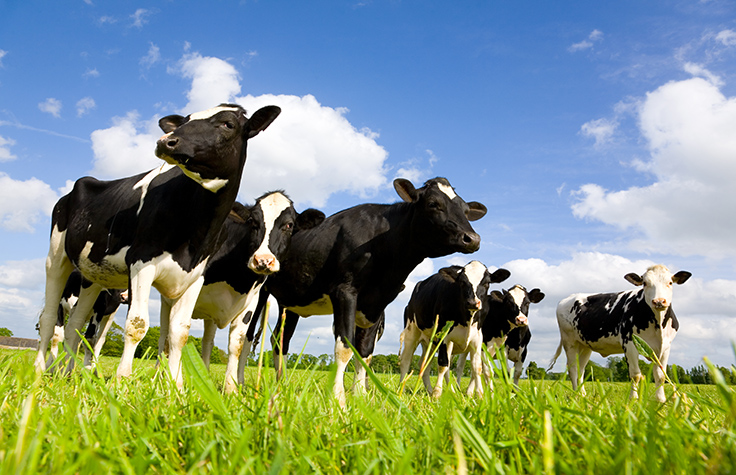 Today, the size of the reference population has doubled and rivals that of North America. Holstein cattle breeders are now using the fifth version of the customized BovineLD BeadChip, and their volume of genomic data has dramatically increased. In April 2016, the partners felt the need to take their relationship to the next level in order to best face all of the challenges raised by genomic selection. Now, EuroGenomics is a cooperative made up of seven EU farmer owned organizations: EVOLUTION and Origenplus in France; CRV in Netherlands; Viking Genetics in Denmark, Finland, and Sweden; CONAFE in Spain; and MCB Krasne and PFHBiPM in Poland.2 The cooperative represents over 10 million Holstein dairy cows and plans to conduct research and continue providing breeders with quality information.

Xavier David, is Chief Executive Officer of Allice3 and VALOGENE. Allice consists of 29 French and Belgian cooperatives providing breeding and reproduction services, and represents the interests of the French members into the EuroGenomics Cooperative. VALOGENE is a sister company of Allice that is dedicated to genomic solutions. On behalf of EuroGenomics, VALOGENE is collaborating with 12 genotyping laboratories in Europe, with the aim of enabling access to innovative and sustainable genotyping solutions. Clotilde Patry, General Secretary of EuroGenomics, facilitates the development and implementation of common projects among all EuroGenomics partners, with the goal of improving service to European farmers.

iCommunity spoke with Xavier and Clotilde to learn how individual Holstein breeders are benefitting from continent-wide data sharing, what lessons they have learned, and how EuroGenomics is elevating the visibility of members worldwide.

Q: What is EuroGenomics and how did you become involved?

Clotilde Patry (CP): EuroGenomics was formed at the beginning of the genomic revolution in 2009, when breeding companies decided to join forces and share data so that individual breeders and dairy farmers could all benefit from high-quality genomic evaluation. After receiving a PhD in Animal Breeding where I focused on the quality of genetic predictions, I joined EuroGenomics to coordinate their genomic projects.

Xavier David (XD): France makes up about one-third of the Holstein cow population in Europe. Allice represents all the French breeding companies that are involved in Holstein breeding. I have a background in running various companies within the artificial insemination (AI) industry. I joined Allice in 2009 to spearhead its adoption of genomic integration, more in an organizational than scientific way, with the goal of increasing the size of the EU’s Holstein reference population.

Q: What was the state of Holstein breeding programs in Europe before the creation of EuroGenomics?

XD: When the United States and Canada started to merge their reference populations at the end of 2008, European breeding companies began to take note.

XD: The United States and Europe are both in the Northern Hemisphere and therefore have similar climates, breeds, and agricultural know-how. One significant difference is that cattle breeding is more industrialized in the United States, whereas you see more family farms in Europe.

“By obtaining genetic information quickly, no matter the age or sex of the animal, we can reduce generation intervals significantly.”

Q: How did EuroGenomics champion the use of genomic tools by European dairy farmers?

XD: The first step was to get European breeding organizations around the same table. In 2009, every partner had invested millions of Euros in genotyping their Holstein populations, and suddenly they were being asked to provide access to all these valuable genotypes to their competitors. Due to history and cultural differences within Europe, collaboration between countries is not always as easy as it might sound. They were not used to cooperating and it took time to build trust. However, they recognized that the key to mutual success was reciprocity and that there was value in achieving something that they would have been unable to reach alone. EuroGenomics certainly sparked a new era of relationships and processes.

Q: What were the first steps in genotyping European Holstein populations?

XD: We began genotyping European Holstein populations with the BovineSNP50 BeadChip. We chose it because scientists told us it was a good tool and that we would obtain a better ratio of quality to price.

Q: Was there any pushback in the early stages of EuroGenomics?

XD: When we first started, one of the original partners had developed its own private customized chip. For some, this was reason not to collaborate with them. However, we discussed it and decided to all work together.

Q: How quickly has genomics been adopted in European Holstein breeding schemes as a result of EuroGenomics cooperation?

XD: Genomics adoption has been swift. Because we were able to bring a reliable tool to the table, Holstein breeding companies started seeing results quickly. In France alone during the last three years, more than 75% of the AIs have been performed based on this information.

Q: What are the benefits of having genomic information for AI?

XD: By obtaining genetic information quickly, no matter the age or sex of the animal, we can reduce generation intervals significantly. For example, progeny testing to obtain breeding values of one bull used to take up to five years. Now it takes a couple of weeks.

CP: Everything is going very fast thanks to genomic selection. The information also enables breeders to select for new traits or characteristics, and avoid genetic abnormalities.

XD: It also provides us with better information on fitness traits.

“The BovineSNP50 BeadChip improved our decision making, enabling us to avoid keeping bulls in waiting stations for several years until we knew the value of the progeny testing.”

Q: What benefits have EuroGenomics’ partners gained from the use of Illumina BeadChips for genomic selection?

XD: The BovineSNP50 BeadChip improved our decision making, enabling us to avoid keeping bulls in waiting stations for several years until we knew the value of the progeny testing. After the release of the BovineLD BeadChip, genotyping became even less expensive, because it shifted genotyping for herd management from the breeding company to the breeder. That enabled breeders to better manage the replacement of their herds. Breeding companies also benefited, because the genetic data increased their understanding of the broad genetic diversity of Europe’s Holstein breed. In France last year, we genotyped 100,000 animals and 70% were females only for management purposes. That’s unbelievable because we only began using the customized BovineLD BeadChips 2.5 years ago.

XD: And that’s only bulls.

CP: I would venture to say that the European Holstein reference population is now bigger than in North America, which is about 25,000 between Canada and the United States.

Q: Why did EuroGenomics decide to develop a customized BovineLD BeadChip?

XD: We are using one of the first customized chips ever developed by Illumina. The BovineSNP50 BeadChip and the BovineLD BeadChip were successful because of the special SNPs dedicated to the European population. The new EuroG10k chip is based on the Illumina BovineLD BeadChip and customized by adding markers for commercial and research applications. We are using it for male preselection in breeding schemes, parentage verification and sex control, and disease and genetic abnormality detection, and for commercial applications to obtain genomic breeding values (GEBV) in heifers. We are also using it for research to test causal mutations, which will lead to new genetic tests and to higher reliability for traditional and new traits.

CP: Each research organization has its own set of research topics that it is interested in pursuing. By having a customized BovineLD BeadChip used systemwide (EuroG10k), we are able to collectively cover much more new information in our research for dairy and beef breeds.

Q: What value has the custom BovineLD BeadChip provided to European Holstein breeders?

XD: The biggest impact has been the quality of genetic information related to fitness traits. Our partners have also been pleased with the capacity to better know the females in the herd using genomic evaluations. It enables them to better manage their herds by providing accurate information about which females are best for breeding.

CP: Data on female genetics is a very powerful tool for farmers. It used to be nearly impossible to have this information before the genomic era. To obtain the same level of genetic information, a female would have had to produce more than 100 daughters.

“The new EuroG10k chip is based on the Illumina BovineLD BeadChip and customized by adding markers for commercial and research applications.”

XD: At the moment, there is a milk crisis in Europe and milk prices are down. Our farmers need to be even more efficient: technically and economically. Genomics provides tools to manage growing herds with precision. By genotyping all females, farmers can optimize herd renewal and create cows that are fertile, resistant to diseases, have good longevity, and need little human intervention.

In terms of export opportunities, this is a complex issue. The world Holstein semen market is dominated by North American companies and genomic selection will not change that. That’s because success in the semen market depends more on networks, know-how, marketing, and international experience, than on the product itself. However, European breeding companies are better able to compete on the world market because they now have high-quality genomic data on their bulls.

Q: What research and development projects are you planning for the future?

XD: We want to integrate all the females into the reference population to implement genomic selection on new traits. We also have thousands of sequences that are currently being investigated to bring more information to genomic tools.

CP: New traits are important because different traits matter to different countries within Europe. In Spain, for example, it is important to have cows that perform well in hot temperatures, so thermal tolerance is critical. In the Nordic countries, they value health the most.

Q: What is the benefit of evaluating young bulls each year on six country scales?

CP: The six country scales are French, Spanish, Dutch/ Flemish, German, Nordic, and Polish. Each scale is based on information from local farmers depending on their specific needs.

Q: How has EuroGenomics succeeded in fostering collaboration between competing organizations?

XD: I tend to use the word “coopetition” to mean that we are able to cooperate in the back office, but in the end, we are all competitors. It’s the same in the United States, where several cooperatives use one central database, but still compete inside and outside the country. EuroGenomics is not a merger of breeding companies, but more a back-office organization.

CP: One advantage US cooperatives have is that they all speak the same language and have one country scale. We have at least six different languages, six different computing centers, and so on. However, we believe that these different experiences create a richer collaboration.

Q: What are the next steps for EuroGenomics?

XD: The next challenge for EuroGenomics will be to help the breeding companies be more visible, attractive, and innovative on the world market.

Q: How do you think genomics will benefit the animal industry in the future?

XD: Genomic selection makes it feasible for new stakeholders to come into the business and stimulate competition. Look at what happened in the US: in just two years, the new entrants on the US market—Zoetis and Sexing Technology—have one-third of the top 100 TPI bulls. That’s amazing when you think about it.

CP: Genomic selection will also benefit developing countries, especially in places like Africa and Asia. Holstein breeders in these countries spend most of their time crossbreeding animals. They need specific tools to better consider the genetic specificities of their local breeds and their farming environment. Genomics can also help them improve production, adaption, and herd management.

Learn more about the Illumina products mentioned in this article: